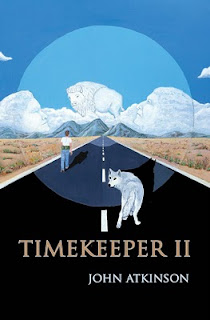 "In Timekeeper II, the protagonist, Johnnyboy/Timekeeper, continues the journey begun in Timekeeper I, although, because of his vision quest on the Sacred Mountain, he can now live up to his Native American–bestowed name and unfold his tale on multiple planes and through multiple blocks of time.

"This extra angle adds much to Timekeeper II, through his first-person narration, Atkinson takes the reader back in time to experience events only hinted at in Timekeeper I. His experience of prejudice and intolerance from both sides of the family as a half-blood Indian are revealed in poignant vignettes, called up as the protagonist makes a second journey in an effort to better understand his heritage and embrace his role as storyteller (complicated by the fact that he is illiterate for most of the early part of his life).

"Timekeeper’s ability to seek information through dreams and visions breaks the bounds of traditional storytelling and brings the reader across nearly a century of U.S. history as it relates to the mistreatment of Native Americans by the military and the local townsfolk. Johnnyboy’s struggle to find common ground between the traditional beliefs of his mother and the Christianity of his father’s people provides a lesson for us all.

"Readers interested in Native American (specifically Sioux) ceremonies such as sweat lodge and sun dance will find the narrative particularly appealing, as will students of shamanism.

"Atkinson’s prose is in fine form, with plenty more of his colorful expressions like, “worshippers spread out in pews like crushed red pepper on barbequed ribs,” that make his writing such a delight to read.

Posted by Patty Cabanas at 7:37 AM