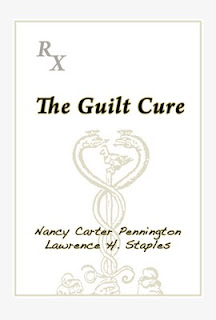 addresses spiritual and psychological means to discover, treat, and expiate guilt and it’s neurotic counterparts. One of the great paradoxes of guilt is that despite its useful contributions to our lives, it can also be potentially dangerous. It is a major cause of anxiety and depression, and if untreated or expiated in some way, guilt has the potential to cause premature death by bringing on an onslaught of physical ailments--and suicide.

The Guilt Cure reaches deep into humanity’s collective experience of guilt and finds persuasive psychological reasons for guilt’s role and purpose that go far beyond conventionally held religious explanations. The conventional view is that guilt’s primary function is the protection and maintenance of morals. While guilt admittedly contributes to the protection and maintenance of morals, this is by no means its only role. Nor is it even its most important role.

Guilt is far more morally neutral than many would suspect. While guilt is conventionally thought to be a result of sin, most guilt, in fact, stems from thoughts, feelings, and behaviors that violate no religious or divine ordinances. The psychological experience of guilt is much broader than the religious definition of sin would account for. The Guilt Cure examines the many faces of guilt, including its more important function in the creation and maintenance of consciousness, its place in the self-regulatory system of the psyche, its effects on our psychological development, and its impact on our mental health and wellbeing.

Posted by Patty Cabanas at 7:39 PM