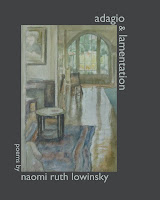 Naomi’s words and images meander through shadows and light, between demons and angels, yet the poetry is always accessible. In this moving collection, she often goes back in time, to the days when her family lived in (and escaped from) Hitler’s Europe. The journey helps inform who she is today, including the indelible scar worn by anyone whose family has borne witness to genocide.
—Stewart Florsheim, author of The Short Fall from Grace.
“(W)e are all/each other’s/raw/material” writes Naomi Ruth Lowinsky in her wise and moving book Adagio & Lamentation, the “we” born not only of others but histories and places, all of this inspiring our very human connection over time to vitality and imagination. Lowinsky’s music is poignant and haunting, moving the listeners and readers of her poems with the miracle of arrival that is all new life and the celebration of thriving.
—Forrest Hammer, author of Call and Response, Middle Ear, and Rift.
Naomi Lowinsky’s poetry is both fierce and tender, political yet intimate; and, for her, the political is personal. Lowinsky’s poems “voices from the ashes” and “great lake of my mother” are particularly moving. Her work is deeply lyrical and transformative. It makes you think and feel. It makes you wish you’d written these poems. Adagio & Lamentation is a stunning and memorable book.
—Susan Terris, author of Contrariwise, Natural Defenses, and Fire is Favorable to the Dreamer.
Naomi Ruth Lowinsky was the first child born in the New World to a family of German Jewish refugees from the Shoah. Many in her family were lost in the death camps. It has been the subject and the gift of her poetry and prose—to write herself out of the terror, into life.

Naomi had a special tie with her only surviving grandparent, the painter Emma Hoffman, whom she called “Oma.” Oma showed her that making art can be a way to transmute grief, a way to bear the unbearable. The cover of Adagio & Lamentation is a watercolor by Emma Hoffman—an interior view of the Berkeley home where Naomi visited her often as a teenager. Oma tried her best to make a painter of her, but Naomi was no good at it. Poetry was to be her vehicle.

Adagio & Lamentation is Naomi’s offering to her ancestors, a handing back in gratitude and love. It is also her way of bringing them news of their legacy—the cycle of life has survived all they suffered—Naomi has been blessed by many grandchildren.

Naomi Ruth Lowinsky is the author of The Sister from Below: When the Muse Gets Her Way

and The Motherline: Every Woman’s Journey to Find Her Female Roots

and numerous prose essays, many of which have been published in Psychological Perspectives and The Jung Journal. Her two poetry collections, red clay is talking

(2000) and crimes of the dreamer (2005) were published by Scarlet Tanager Books. She has had poetry published in many literary magazines and anthologies, among them After Shocks: The Poetry of Recovery, Weber Studies, Rattle, Atlanta Review, Tiferet and Asheville Poetry Review.

Naomi has been nominated for a Pushcart Prize three times and is the recipient of the 2009 Obama Millennium Poetry award for "Madelyn Dunham, Passing On.” Naomi is a Jungian analyst in private practice in the San Francisco Bay Area, poetry and fiction editor of Psychological Perspectives, and a grandmother many times over.

Place your order for Adagio & Lamentation at the Fisher King Press online Bookstore. Also available from your local bookstore and a host of online booksellers, including Amazon.com