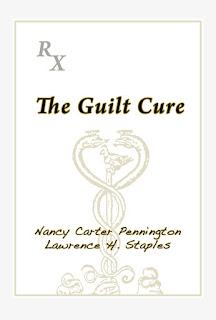 From Pennington and Staples' The Guilt Cure:

All of us carry psychic wounds that were inflicted in childhood. In order to be safe and to be loved, we cut off and repressed thoughts, feelings and behaviors that were unacceptable to our parents. It is this “cut” that wounds us. None of us escapes these wounds because there are no parents to whom all thoughts, feelings and behaviors are acceptable. No parent gets it right. We are prone to think that the parent who neglects us is more wounding than the one who is over-solicitous and attentive. Both wound us. The wounds are different but they both hurt.These wounds become our developmental deficiencies. Our life long challenge is to recover the rejected qualities in order to become whole and live fuller lives.

Guilt lies behind these wounds. We avoid the unacceptable qualities in order to escape the painful guilt we are wired to experience when we violate parental values and wishes. And the behaviors we adopt early in life to avoid guilt, punishment and loss of love, continue throughout our lives as repeating patterns of behavior. If guilt is a necessity in life, then psychic wounds are also necessities. These necessary wounds determine the developmental path we must follow if we are to recover those cut off qualities and heal our wounds. We have to bear painful guilt if we are to become whole, just as we have to bear painful hunger if we are to lose weight.

It is the urge to develop and become whole that lies behind our repeating patterns. One pattern that most people experience is the tendency to keep choosing a partner that has the same difficult qualities as the previous one. Usually we are attracted to someone opposite, someone who carries qualities that we ourselves can’t express. The persons we are attracted to may superficially seem different, but psychologically be much the same. For example, we may always be attracted to someone who is relatively unavailable. We then repeat the childhood experience we had with one or both of our parents.

The way of dealing with the unavailability may differ from child to child. One sibling may react by clinging, by expressing its neediness, by clamoring for attention or complaining when it is insufficient. Another sibling may react just the opposite. He/she may resolve to become self-sufficient and demand little from the parent. This sibling may take care of the parent and learn that safety lies in being the good boy or girl who never creates a burden for the parent. The other demands to be taken care of and is a real burden to the parent.

Later in life, these two are attracted to each other. One needs to be taken care of. The other needs to take care of someone. As it turns out, they are both needy. But both are unconscious of it and deny it. It’s the basis for the widespread phenomenon of co-dependency. It’s a secret collusion. On the surface, one feels angry and rejected if his every need isn’t being anticipated and met. But deep inside, he feels guilty because he feels unworthy of care and attention. Meanwhile, the other feels just the opposite. Consciously, she feels guilty if she isn’t anticipating and taking care of every need of the loved one. And underneath she may be filled with anger and resentment when her caretaking is not deemed satisfactory or is not appreciated. Her sense of self worth depends on proper acknowledgement of her efforts.

The displeasure and dissatisfaction that arise actually give us a hint about how to break this pattern. After many painful experiences, we eventually discover that healing takes place when we can treat the partner as we have been treated. The healing element is almost always homeopathic. Rather than trying to get the partner to behave differently, we have to take on some of the very traits we thought we wanted them to change. We have to develop traits that we have spent a lifetime trying to avoid or deny. The always available person becomes less available. The always unavailable person become more attentive.

In order to behave homeopathically, we have to do inner work in the shadow where our opposite qualities have been stored. We have to become very conscious of our own feelings. For example, a caretaker cannot become unavailable without experiencing guilt and anxiety. If we become conscious of our guilt and anxiety as it arrives, we can name it and bear it. If we resolve to bear those feelings, they will not last long. The same thing happens in dieting. If we are not watching our feelingscarefully, the hunger comes and we grab a cookie without reflection. If we feel and name the hunger just as it comes and resolve to bear it, the hunger will not last long.

In Mel Mathews’ novel SamSara, we see that the hero, Malcolm Clay, is caught in a repeating pattern. He is always strongly attracted to women who are unavailable. He meets this beautiful woman named Kelli. Kelli is focused on her own work projects and is not readily available to others. Malcolm falls for her. Her behavior is random and intermittent. He never can reliably count on her showing up for a date or returning a call. Sometimes she will; sometimes she won’t. Her behavior drives Malcolm crazy as he chases her around the world. Eventually, he ends up in Ireland where she lives and he is repeatedly let down by this incredibly attractive woman.

After much hurt and pain, Malcolm is finally able to let go. He does it with a homeopathic treatment. He gives her a dose of her own medicine. She invites him to meet for a drink at one of the local hangouts. When he sees her coming this time, he slips out the back door, gets on a train and heads for the airport. She arrives at the café and soon begins to call Malcolm trying to find out where he is. His phone rings just as the train approaches the air terminal, and he notices a young boy crying in his mother’s arms. “Hey kid, you’ve got a call,” he says, handing the whining boy the phone before stepping off the train.

It is likely that Malcolm had to bear much anxiety and guilt in order to stand Kelli up. Malcolm values reliability, dependability and keeping his word. It makes him angry when others don’t behave the same way. But, in this moment, he had to save himself by finding in his unconscious a quality that had been put there long ago in order to safely traverse childhood. He had to become unavailable. Malcolm also had to suffer through much painful yearning, just as an alcoholic does when he gives up something that once made him feel good but later made him feel bad. And like an alcoholic who gives up alcohol, he has to spot the yearning the moment it begins, acknowledge it, name it and suffer it momentarily, perhaps several times until the yearning passes.

About the Authors of The Guilt Cure

Posted by Patty Cabanas at 5:56 PM