: A Journey through Art to the Feminine Self

Artists plumb the depths of soul which Jung calls the collective unconscious, the inheritance of our ancestors’ psychic responses to life’s drama. In this sense the artist is priest, mediating between us and God. The artist introduces us to ourselves by inviting us into the world of image. We may enter this world to contemplate briefly or at length. Some paintings invite us back over and over again and we return, never tiring of them. It is especially these that lead us to the Great Mystery, beyond image. Re-Imagining Mary is about meeting the Cosmic Mary in image and imagination, the many facets of the Mary image that mirror both outer reality and inner feminine soul.

In western Christianity this Mary bears the titles and the qualities worshipped for thousands of years in the Female images of God and Goddess. These titles include Mary as Sorrowful One and as Primordial Mother. Recovering Mary both as light and dark Madonna plays a crucial role in humanity’s search for a divinity who reflects soul. Also discussed is Mary as the sheltering Great Mother that Piero della Francesca suggest in the Madonna del Parto and Mater Misericodia. Frederick Franck’s The Original Face and the Medieval Vierge Ouvrante also suggest this motif of Mary as Protector of the mystery of our common Origin. Franck’s inspiration for his sculpture of Mary was the Buddhist koan—”What is your original face before you were born?”

Here’s what a few of Mariann Burke’s contemporaries have to say about Re-Imagining Mary:

“Mariann Burke has undertaken the remarkable and urgent task of grounding one of the major icons of Christian history, Mary. She plants Mary side by side with her ancient sister colleagues: Isis, Kali, Demeter, Tara and others, revealing Mary’s ancient roots. This reading is critical for the 21st century since, through Mary, one expression of the Feminine archetype, matter can again be seen as divinized and the idea of incarnation pushed solidly into the matter of all things. Re-Imagining Mary is really re-imagining ourselves as women and men giving birth to God in newer and more relevant ways today. It is reimagining not only our own personal soul’s journey but also the deep sacredness of the soul of the world itself.” —Fred Gustafson, author of The Black Madonna.

“In this beautiful book, recounting her personal journey of discovery, Mariann Burke offers us her awakening to the experience of the Feminine. We follow her as she encounters and responds to images of Mary which hold meaning for her: Mary as Virgin Mother, Mary as Mirror, Mary as the Compassionate Sanctuary for suffering humanity, Mary as Temple, Mary as Black Madonna and Divine Wisdom. Through her contemplation of these images, she leads us deeper into an understanding of the Feminine and into unexplored dimensions of the soul. This is a book to savor and return to often.” —Anne Baring, co-author of The Myth of the Goddess: Evolution of an Image.

“For two millennia throughout all Christendom the image of the Blessed Virgin Mary has been adored. From the lofty world’s cathedrals to the smallest Christmas crèche that adorns a humble family dwelling her representation is present. Anthems are sung to her, voices are raised to praise her name, her very being. And yet standing back with some reflection, are we consciously aware of a deeper, more significant meaning of Mary? In Re-imagining Mary, may we broaden our understanding of the profound psychological value her image holds for us. As author and analyst Mariann Burke wisely guides us and reawakens us to a renewed vision of Mary, we consciously begin to understand the extent of what her image embodies.” —Nancy Qualls-Corbett, author of The Sacred Prostitute and Awakening Woman.

“This fascinating and energizing book is the fruit of the author’s travels, study, contemplation, and personal experiences. I heartily recommend it to anyone who wants to begin or continue to face self, death, pregnancy in its various modes, and spiritual creativity. Using her readings of Mariann paintings and sculptures, from Fra Angelico to Warhol and Franck, Burke explores the Divine Feminine as a powerful force in the past, present, and future.” —Jane D. Schaberg, Professor of Religious and Women’s Studies, University of Detroit Mercy, author of The Resurrection of Mary Magdalene.

Mariann Burke is a Jungian analyst in private practice in Newton, MA. She holds graduate degrees from the University of Pittsburgh, Andover-Newton Theological School, and the C. G. Jung Institute in Zurich, Switzerland. She has done graduate work in Scripture at Union Theological Seminary and La Salle University. Her interests include the body-psyche connection, feminine spirituality, and the psychic roots of Christian symbolism. She is a member of the Religious of the Sacred Heart (RSCJ).

A Cast of Coins—A Book About Messages 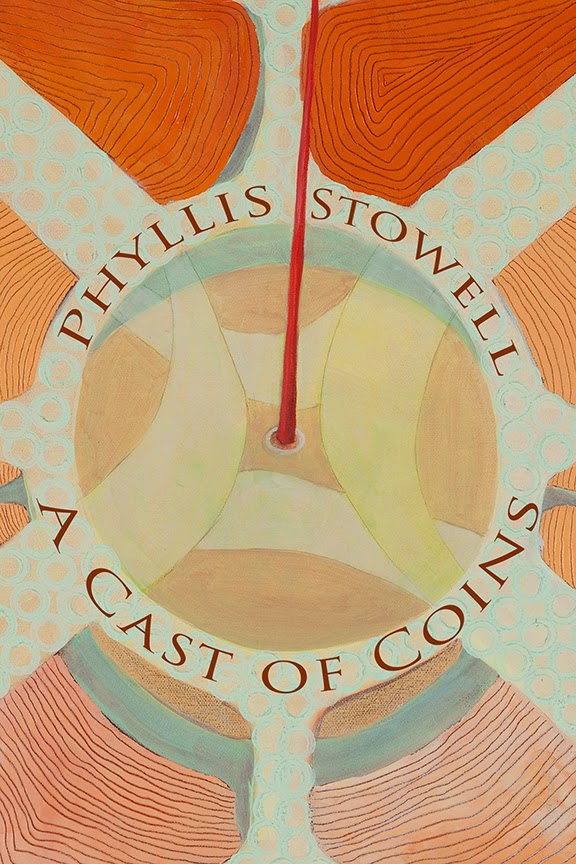 A Cast of Coins

A Cast of Coins derives from contemplation of the language and images encountered in the I CHING, an ancient Chinese text used for divination. Those who are unfamiliar with the I CHING (or Yi Jing) The Book of Changes, will be able to read the poems as poems without referring to it. However, some knowledge of this text would add a dimension to the reader’s experience. At the core lies an interchange between concept and image taken from nature as well as cultural, social and religious life. A Cast of Coins is a book about messages.

Phyllis Stowell has a PhD in Depth Psychology and Poetry and currently is Co-chair of Friends of the C. G. Jung Institute, San Francisco. She was a founding member of the Saint Mary’s College MFA where she was elected Professor Emerita. She is the author of six volumes of poetry, including Sundered, the bilingual art/poetry book Shield/Bouclier with art by Pacia Sallomi, and co-editor of Appetite: Food as Metaphor: An Anthology of Women Poets.

Advance Press Release for March 15, 2014
When the Pixies Come Out to Play: A Play Therapy PrimerBy Lois Carey“When the Pixies Come Out to Play: A Play Therapy Primer is the work of a true master of the craft of sandplay therapy informed by Jungian theory and the pioneering work of Dora Kallf with whom Lois Carey studied. Woven into the exquisite  tapestry of this lovely book is history and theory of the method, rich case material told in a warm and moving voice which reflects the extraordinary empathy of this remarkable sandplay and play therapist . . . A wealth of information packed into a highly readable book that just like the author herself will be a cherished gift to us all for a long time to come.” —David A. Crenshaw, Ph.D., ABPP, RPT-S Clinical DirectorA collection of essays and articles written over a 30 year span by a seasoned sandplay therapist. Lois J. Carey is the training director and supervisor of the Center for Sandplay Studies. She is a graduate of the Columbia University School of Social Work; licensed clinical social worker in New York, Fellow in NY State Clinical Social Work Psychotherapists.; clinical member New York Assn. of Marriage and Family Therapists; Registered Play Therapist Supervisor of the Association for Play Therapy and a Registered Play Therapist.  She is past-president of the NY Association for Play Therapy. Post grad studies in Sandplay in Switzerland and California with Dora Kalff as well as Martin Kalff and in New York with Genevieve Geer. Part of her training has also been in Art Therapy from a Jungian perspective. She has presented Sandplay and Art Therapy throughout the United States, in Europe, South Africa and Greece. She is the author of numerous articles and several books."The metaphor that comes to mind as I read this book is that of the aboriginal painting—a large canvas of lots of varied sized and colored dots which represents a map of the territory. This book provides an extensive map of the territory, that is Play Therapy, Child Therapy and sand play as it applies to children, with a particular Jungian slant. I would recommend this to practitioners and students who can learn from its wisdom." —Aideen Taylor de Faoite, author of Narrative Play Therapy: Theory and Practice."When Pixies Come Out to Play is a wonderful book for any clinician who uses creative mediums in their therapeutic work. It is a book that provides a back drop to understanding art therapy, play therapy and sandplay from a Jungian perspective. It provides a history and theoretical framework to create context and a lens to view the work through." —Majella Ryan, Biodynamic and Integrative Psychotherapist, Child Psychotherapist.PART I: OVERVIEW/METHODOLOGY1. Overview of Play Therapy2. Jungian Theory3. Jungian Sandplay Therapy4. Art as Therapy5. Three Methods of Sandplay Therapy6. Supervision for Sandplay Therapists7. Sandplay, Art, and Play Therapy to Promote Anxiety Reduction8. Ages and Stages of Child Development9. The Mind/Body Connection in SandplayPART II: TRAUMA and OTHER DISORDERS10. Sandplay Therapy with a Troubled Child11. Violence and Trauma in Sandplay Issues in Healing12. Case of BD13. Attachment and Loss: The Bereaved or Attachment Disordered Child in Sandplay Therapy14. A Dog Called Sweetheart15. Sexual Abuse: Historical Comments16. Sexual Abuse Defined17. Assessment of the Sexually Abused Child18. The Acting-out Child19. Post Traumatic Stress Disorder (PTSD)PART III: FAMILY/CULTURAL/SPIRITUALITY20. Family Sandplay Therapy21. Family Genograms in Play Therapy and Sandplay22. Puppetry in Family Therapy23. One Family’s Sandplay Journey24. Death of a Parent or Grandparent25. A Case of Suicide26. Cultural Diversity27. Spirituality in Sandplay TherapyPART IV: A BRIEF INTRODUCTION TO SYMBOLS AND ARCHETYPES28. Symbols and Archetypes in Sandplay Therapy29. Sandplay and the Great Mother Archetype30. Dismemberment and Healing in The Wisdom of the Serpent31. A Commentary: Symbols in Alice in Wonderland Product DetailsWhen the Pixies Come Out to Play: A Play Therapy PrimerPaperback: 280 pagesPublisher: Genoa House; 1st edition (March 15, 2014)Language: EnglishISBN-10: 1926975111ISBN-13: 9781926975115
Posted by Patty Cabanas at 10:35 PM No comments: