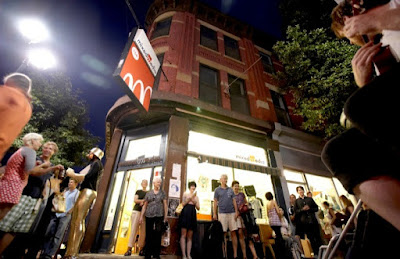 Art Crawl was something unfamiliar to me until a few months ago when I started hearing about it from my two sons Phil and Sean who are, in my opinion avid art crawl-ers. Sean would try and switch a day off work just to attend this every second Friday, monthly social event. Phil may have had skipped work a time or two just to be in the crowd of mostly young and a handful of not-so-young art crawler folks.
A little over two months ago, we moved into a small two bedroom apartment on the street that hosts Hamilton Art Crawl. Tonight was my first unplanned Art Crawl experience by accident when we went for dinner at Ola Bakery that became like a second home to us. Lo and behold! The place was packed with art crawlers and Friday evening regulars, and a table for one was not in sight let alone a table for three. The owner ushered us to sit with a nice looking young man—a regular and a friend of his—seated solo at a table for five, polishing off a sandwich. After a brief but not awkward moment of introduction, Alex proceeded to take smaller but still healthy bites of his sandwich while managing to fill us in on bits and pieces of his family history. He grew up in Hamilton and used to live in Stoney Creek with his mom and dad until his retired parents decided to split their time between Portugal and Canada, so he ended up moving to downtown core of Hamilton. When asked what part of Portugal he was from, he looked up at a map of Portugal that was posted on a wall next to him and conveniently got up from his seat and pointed his index finger to Aveiro.

As we visited while waiting for our BBQ chicken dinner, the front door to the bakery opened and closed while people piled in and the tray of the ever popular custard tarts was quickly thinning down. Across from our table, a group of loud regulars composed of a few men and a babe with half exposed chest, were far from having a 'nice' conversation the way they were throwing words at one another but I tell you, no eye contact was happening for the woman. Imagine this: A woman sitting among men and while she spoke with hand gestures, a group of synchronized heads bopped along. Additionally, the stronger the hand gestures, the higher the bouncing of the twin balls and the bopping heads. Thankfully, our dinner arrived and my partner was able to avert his attention from the pair of giant meatballs.

Alex finished his sandwich and got up to leave as more art crawlers came in for their evening sugar fix, and a full tray of fresh custard tarts was now placed in the showcase. Taking a break and leaving his wife and employees to manage the growing crowd, Mr. Victor came and sat with us to enjoy his chamomile tea and shared us some of his family history. Two hours later, we were on the street art crawling it too! Art stores, coffee houses, bars and more, are open to the public until midnight to fill the eyes and appetite of interested patrons. It was a beautiful crisp night and the slight pour of white flakes coming down made me imagine walking along the Central Park of New York. I could have kept walking until my ears and nose became numb and cheeks beet red but opted to walk slowly home.
September 10, 2011, a portion of James Street was closed off to accommodate Supercrawl, an annual event that celebrates the diversity of Hamilton’s James Street North district, our multi-disciplinary arts community, and the incredible spark that results with our unique mix of cultures, businesses and creative people. It's a free afternoon and evening of art, dance,  music, or anything one's little heart desire, from 1 PM till Midnight.
The Art Crawl last December that we had planned to experience didn't pan out. We were grumpy and exhausted from the move, we had fallen asleep before 7 pm—slept through the loud music that was playing downstairs at the Bakery.

January Art Crawl didn't appeal from the quiet street that appeared down below. March promises a new beginning for the Art Crawl year. We have been told today that a Columbian musician will be performing at the Bakery. I look forward to art crawling on the eve of Friday March 9. I'd like to reserve the best table on the house for this event, please!

Below is a short list of what's available on James St. N: